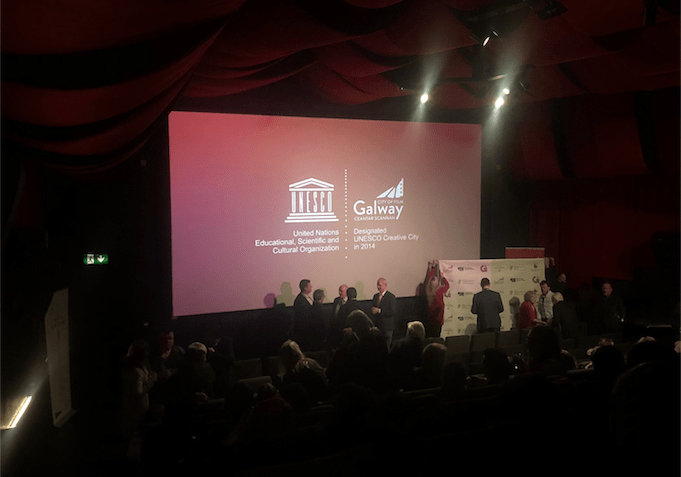 A special industry event held last night in Galway celebrated 2 key anniversaries in Film in the city. In 2014 Galway became the fifth city in the world to achieve the status of UNESCO City of Film, in recognition of the rich history and vibrant culture of filmmaking that continues in the city and county to this day. Galway City of Film is now celebrating its 5th anniversary of that recognition, and is taking a wonderful opportunity to look back at what has been achieved so far.

City of Film highlights include organising camps for young filmmakers and animators, hosting the One Minute Film Festival and 48 Hour Challenge, supporting short film funding schemes through Galway Film Centre such as Science on Screen and the GFC/RTÉ Short Film Scheme, local initiatives supporting industry including the Fís TV Summit and the WRAP Fund, as well as screenings, student exchanges, research and collaboration across the now 18 Cities of Film in the UNESCO Creative Cities Network.

With the confluence of these two events comes a unique opportunity to present our Galway UNESCO ‘City of Film/Ceantar Scannán’ Award to local film producer Lelia Doolan. An honour that has only been presented to one other recipient, Uachtaráin Michael D Higgins. It is difficult to think of anyone that has contributed more to the local and national film industry than Lelia Doolan and Galway City of Film wish to honor her and her legacy of incredible work by presenting this award to her as part of our celebrations.

Launched in 2014 by Uachtaráin Michael D. Higgins, Galway City of Film has offered valuable supports and resources to the filmmaking community in the city over the last five years that otherwise would not have been possible.

The award presentation was followed by a screening of Cumar – A Galway Rhapsody, a feature film directed by Aodh Ó Coileáin and produced by Paddy Hayes celebrating Galway artists including Rita Ann Higgins, Tommy Tiernan and Noeline Kavanagh.