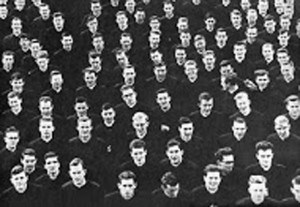 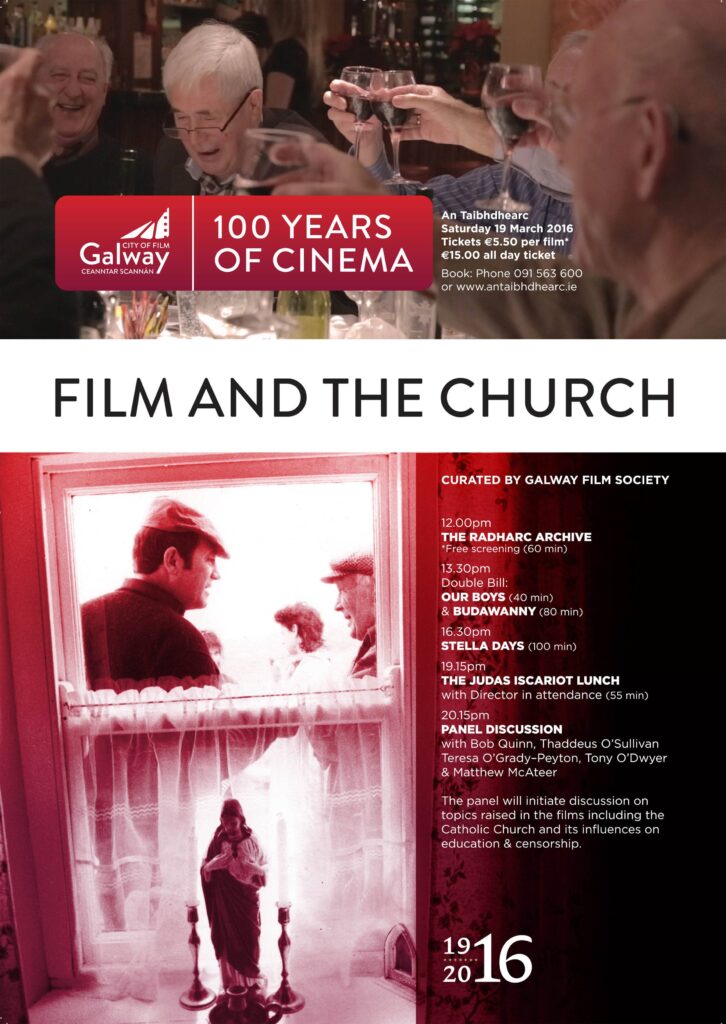 Galway, UNESCO City of Film, is commemorating the 1916 Rising with an exciting programme of seminal Irish Cinema and landmark television events to take place over eight Saturdays throughout 2016. This programme, called 100 Years of Cinema, will take the form of one-day events, roughly one Saturday per month, to include screenings, debate and lively discussion of the development of our national identity and our national cinema over the past one hundred years. Each event will be themed and programmed by a different guest curator, with the March screening curated by Galway Film Society.

Galway Film Society will explore the theme of Film & The Church on Saturday 19, March in An Taibhdhearc with selected screenings and discussion. The programme starts at 12pm on the afternoon of Saturday 19th March with a special UNESCO City of Film FREE SCREENING of footage from The Radharc Archive. The Radharc collection is unparalleled in the canon of Irish filmmaking due to its longevity and the breadth of the subjects it covered. The Radharc team made over 400 documentaries between 1961 and 1996 displaying the type of insightful and challenging filmmaking that would garner them many critical accolades. They were not afraid to tackle difficult and often controversial topics and their standing as clergy allowed a level of access that a team of lay filmmakers may not have been able to achieve.

At 1.30pm there will be a double bill of screenings with Our Boys & Budawanny. Our Boys, directed by Cathal Black, is a politically and technically bold short docu-drama that fuses dramatisation, interviews, and archive footage in an exposé of the culture of fear and brutality that defined the regime in educational institutions run by the Christian Brothers. Budawanny, directed by Bob Quinn, is a contemporary silent film, made in 1987 and acknowledged by many as perhaps Bob Quinn’s greatest achievement. This fascinating and rarely seen film tells the story of a young priest, played by the great Donal Mc Cann, who becomes romantically entangled with his housekeeper.

At 4.30pm Stella Days, directed by Thaddeus O’Sullivan, starring Martin Sheen is a pastoral drama about a scholar priest struggling to maintain authority in small-town 1950s Ireland. Sheen plays forward-thinking Father Barry, whose hopes of reappointment to Rome are dashed by tenacious Bishop Hegarty whose sole objective is to control the ‘hearts and minds’ of the dwindling population by building modernist churches designed to dominate horizons around the country.

Following this at 7.15pm will be a screening of new Irish documentary The Judas Iscariot Lunch, with director Teresa O’ Grady Peyton in attendance. Refreshing in its approach, The Judas Iscariot Lunch presents thirteen Irish ex­priests who speak candidly and frankly about the crossroads they came to with their beliefs, after being ordained and positioned as missionaries in East Asia, the Pacific and South America in the 1960s and 1970s.

To finish the event, at 8.15pm, there will be a Panel Discussion chaired by Matthew McAteer with Bob Quinn, Thaddeus O’Sullivan, Teresa O’Grady-Peyton, & Tony O’Dwyer. The panel will initiate discussion on topics raised in the films including the Catholic Church and its influences on education and censorship.

Details of upcoming 100 Years of Cinema events at www.galwayfilmcentre.ie