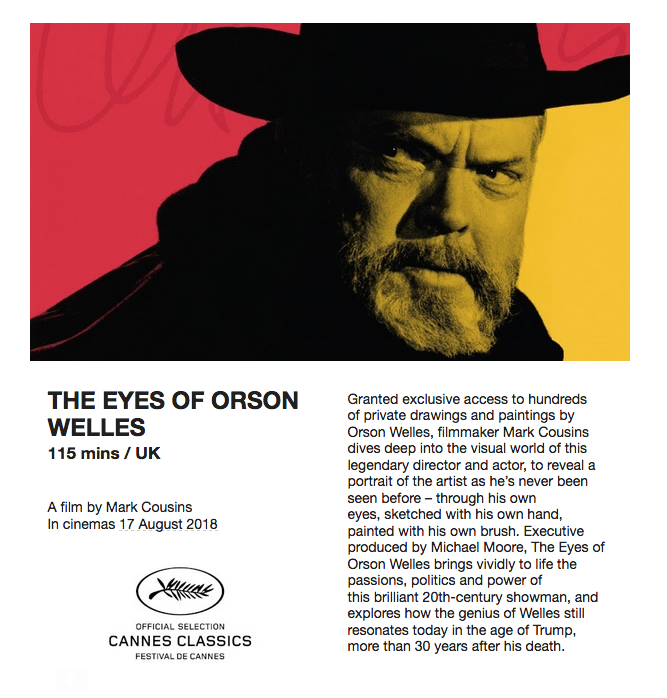 By Alan DugganJuly 4, 2018No Comments

Galway City of Film is delighted to welcome filmmaker Mark Cousins back to Galway for the screening of his new documentary, ‘The Eyes of Orson Welles’. The film will screen at 7pm on August 23rd in An PÁLÁS, followed by a Q&A with Mark, hosted by Declan McGrath.

Places for the screening event is limited and tickets are priced at €5. To book please book through EVENTBRITE.

Executive produced by Michael Moore, ‘The Eyes of Orson Welles’ brings vividly to life the passions, politics and power of this brilliant 20th-century showman, and explores how the genius of Welles still resonates today in the age of Trump, more than 30 years after his death. Parts of the documentary were filmed in Galway city and Connemara, retracing the steps of Welles’ solo trip to Ireland as a teenager.

Welles’s films as an actor and director, such as ‘Citizen Kane’, ‘Touch of Evil’ and ‘Chimes at Midnight’, are among the greatest and most innovative ever made and he is one of the most famous cultural figures of the past hundred years. But one aspect of his life and art has never been discussed; Welles loved to draw and paint and as a child prodigy, he trained first as an artist. A solo drawing trip to Ireland in his mid-teens took his career in a whole new direction. He talked his way onto the stage at Dublin’s Gate Theatre, and instant stardom followed. Yet Welles continued to draw and paint throughout his life, for his own pleasure, and now, for the first time, Welles’ daughter Beatrice has granted Mark Cousins access to this treasure trove of imagery, to make a film about what he finds there.

Cousins travels to key locations in Welles’ life – Ireland, New York, Chicago, Kenosha, Arizona, Los Angeles, Spain, Italy, Morocco – to locate the artworks, and to dramatize some of the defining moments in Welles’ career and personal life. Mark shot the film with two handheld cameras, one tiny HD camera and one 4K camera which gives a new “Steadicam- style” of tracking shot without the need for tracks and dolly. It’s the sort of technology that Welles would have loved, and could only have dreamed of as he spent a lifetime wrestling with the creative and financial limitations of traditional film-making techniques.

In the end, this essay film is about much more than the drawings and paintings. This film is an encounter with the imagination of this great artist, who extended cinema, was profoundly political, engaged with questions about power, existentialism, memory, destiny, filliation, psychology, space and light. These ingredients make ‘The Eyes of Orson Welles’ not only a portrait of a great man, but an account of the 20th Century, and a meditation on the continuing relevance of his genius in what Mark describes as these “Wellesian” times.

Mark Cousins is an Irish-Scottish director and writer. His films – ‘The First Movie’, ‘The Story of Film: An Odyssey’, ‘What is This Film Called Love?’, ‘Life May Be’, ‘A Story of Children and Film’, ‘Atomic’, ‘I Am Belfast’, ‘6 Desires’, ‘Here be Dragons’, ‘Stockholm My Love’ – are about childhood, cities, recovery, walking and cinema. He is currently editing a 22 hour film, ‘Eye Opener’, which looks at cinema from the perspective of women directors.

Galway City of Film had the pleasure of hosting Mark in Galway City on June 21st 2017 for a special screening of ‘I Am Belfast‘, see some photos here from the event.

This event is run with the support of the Department of Culture, Heritage and the Gaeltacht.